​The Music Of Ben Myers 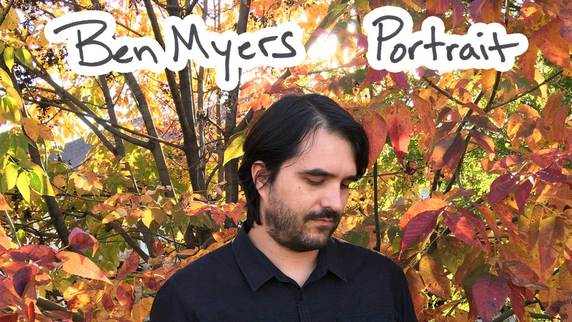 ​I am a singer-songwriter from Kansas and have released my 11th album, titled “Portrait”. My sound is mellow and bluesy with a strong sense of pop. This 16 track album has a very “singer-songwriter” feel as it is made up of entirely acoustic guitar, piano, and vocals. The album takes on some darker themes such as domestic abuse and abandonment, with songs dedicated to each. My album also explores themes of the human psyche and relationships as shown in the more everyday and mundane, but always suggesting a bit of wonder just around the corner.

I have paid for the costs of the album out of pocket such as the mastering, 1,000 CD’s, equipment, distribution and software fees. I would like to make another music video, finances permitting, of one (or more) of my songs to promote and display on YouTube and my website.

​I am a singer-songwriter from Salina and Lawrence Kansas who has been making album since 2006. I have just released my 11th album. I have been marketing my music heavily on social media for about 4 years with a good amount of success. I have performed all over the Lawrence area and performed in the 1st annual Kansas City Porch Fest in 2014.

My musical style borrows a lot from the classic rock acts of the 60’s, like the Beatles, from folk artists like Nick Drake, and also from alternative acts of the 80’s and 90’s. I am very much a music scholar based on how much music I’ve listened to and studied.

I am currently residing in Lawrence, KS and have been mostly working in my studio the last couple years.

​I believe my songs can affect those who are struggling in life in a few ways. My music itself offers an escape from the ordinary as I have a very hushed and unique calming sound. I also explore many different themes in my work related to relationships and self-growth. On this album I have a song that very directly explores the feelings of powerlessness felt with domestic abuse, and also the empowerment that comes with the knowledge of such abuse. I am trying to create an awareness of the behaviors that abusers have so that people know what to look out for, plus it helps that the song is upbeat and catchy.

My songs may also help in people’s relationships with each other as a lot of attention is put on getting through tough times.

In the larger sense I hope my music inspires others to be creative.

I intend to share music videos and full songs on the site as well as a full video interview about the album and my music. I would also enjoy putting together a songwriting workshop for others while inviting them to explore their creativity.

I intend to share the message of Soul Bloom to my large group of Twitter followers and also on my website.
​
Listen to my sound and message at www.BenMyersOnline.com or on Spotify and iTunes.
Donate Now

Start Your NonProfit for $150
Apply Today